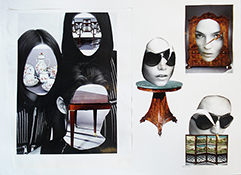 “I experience a lot of trauma and there was quite a lot of abuse as a child. I think that ended up affecting my identity and so I’ve cut out the faces because that’s how we identify people. I cut them out and I put the furniture behind so that it is covering the faces because sometimes I feel I become an object. I had an affinity with objects because when you are a child and you get really lonely objects become your friends. At times thoughts like ‘I’m a teapot disguised as a human’ go around in my head. I felt that maybe I was an inanimate object because I was treated like one. So there’s a humorous side to it, but there’s also a very dark side. On the right side I’ve put the faces that I cut out from the left side.”

“With this one I’ve taken out the legs and when I saw the girl without the legs I saw the potential to put another object behind because I had a breakdown when I was twelve and I couldn’t walk. I broke down physically and mentally and had to have help with walking because I couldn’t move. But I ended up receiving more bad care, so my legs and the ability to move really resonates for me. Then I put in another object because what was happening to me was just totally dismissed. I know I was right, but no one listened to me. Your mind tries to protect you. I had a breakdown when I was twelve because I needed help. All that stuff comes together with the objects and the faces and identity and me trying to process this now as an adult.”

One thought on “Collages 8”