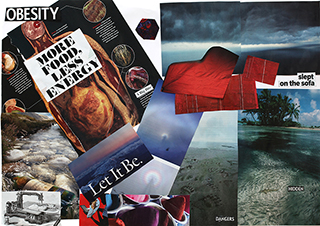 “I put obesity because I’ve had a lot of issues with food. I used to be anorexic and then I started taking anti-psychotics and they made me obese. Now I’ve lost a couple of stone, but I’m still over weight so I put more food less energy and a big image of obesity. I cut out “slept on the sofa” because when I’m not well I sleep on the sofa a lot. I don’t go to bed, I sleep fully clothed. And this is some redness and some red blood cells that I found because I self-harm quite a lot. This bit over here is some fish, and I put “hidden” because I’ve got a fear of fish. It means I don’t go swimming or anything. And I’m hiding in fear. This is a screen. When I’m not well I think TV screens and phone screens can control you. And this is a mouse, because one time I cut up a mouse and pulled all its organs out. It was horrible, I really wasn’t well, so I put dangerous there. Then the nicer bits – this is some sunshine coming through, and this is “Let it Be” – I learnt in therapy let is be is better than let it go. The different areas of the collage are: food and body image, and fatness; self-harming, depression, anxiety, paranoia; and then calmness and getting well. The sewing machine is a nice thing to do for recovery, and its quite mindful because when I sew I’m totally in the moment. I can’t be thinking about something else, or I wouldn’t be able to sew. I did a sewing course last year and I made a friend who is “normal”. It made me confident because I thought I could mix with people who aren’t service users. I’ve been in the system a long time and all my friends are service users”.

One thought on “Collage 16”